A letter from here.

It has begun to look more Springy here in the Northern State, and my mind wanders to all the perks of Springdom.....the lawn is lookin' mighty hurty out there, and I might need some professional help to make it look its usual, mediocre self. But, I can finally get to the bird feeder (it had been buried behind one very large and very angry looking drift, that came to be in the Great Christmas Blizzard of '09, and as multiplied exponentially by the Slightly Less Great But By No Means Ignorable Blizzard of February '10. So, I can set out some seed and wait for the songs to begin again.

I've lived on this longitude before; I know that when spring comes, it comes in a feint; Mother Nature has this habit in the Northern Climes....she lures us into believing that we can put away the things of Winter and then, BLAMMO! You get one, last, beautiful snowstorm that leaves accumulation, and you curse one last time as you fire up the blower.

I prefer snow. I can remember one Spring, when Mom Nature sent ice. Tons of ice.

Ice in good....for a drink. Bad for driving, or hoping that the power poles can stand the extra weight, and not snap like pitiful toothpicks.

Work is work, of course.....and in the past couple of days have had my fair share of adrenaline inducing situations...but nothing you need worry about. In fact, I'm pretty sure that if you DID need to know about it, I would have called you all, individually, and the hell with clearances and what-not. But the truth is, these events are all....deceptively scary. And they wind down, and they are taken care of. It is a pity my organization cannot glorify their successes; and because of that, are only attended when something goes wrong.

Okay, I'll be honest. They keep pissing me off. I'll get a raise, and then the raise will be taken away because of some award I got LAST YEAR, and I'm wondering just how long I'll be punished for doing my job well.

Yeah, it's really a minor point; I'm not starving. But I do have an ache; and it is brought on by the fact that I'm now used to having money at the end of the month, and it has becomes...virtually...impossible for me to move on to something I would like better, but would probably starve doing.

Well, there's really not much more to say for today, so I guess I'll get ready for another work day. Hopefully, it'll be a quiet one.

Late night commercials, and how to loathe them.

I get unusually sensitive to things when I'm deprived of sleep, and since it's 0300 and it's Friday morning and I don't sleep very well over Thursday.....

I see these commercials on television, people bragging that they owed 12,000 on their credit card, and only payed 13.95.

Is anybody else pissed off about this? I mean, besides the credit card companies?

When I was a younger man, I toyed with the idea of bankruptcy; I even had several appointments with an attorney in the Mitten, to put the wheels in motion.

I never did, but it was nice that I had that option, and I didn't expect to get off scott free. I expected to pay something for the option of killing my credit rating and starting fresh. I did take advantage of a credit counseling service, that helped me out a great deal.

But these commercials feel like these people are running up huge tabs, and then running for it, like a huge dine-and-dash. And I find this unacceptable.

Just my opinion, and I'll freely admit that I am, in most cases, more full of s**t than your average bear.

On a final note, I want to punch the "finallyfast.com" kid in the crotch. Several times.
Posted by Historiclemo at Friday, March 26, 2010 No comments:

could somebody please take my brain? nobody else is using theirs, and I want to be a part of it.

Based upon what I've seen and heard, I am simultaneously proud and appalled to be an American. It's kind of like throwing up a really great meal.

The level of vituperation coming out of the debate in the houses of our government was, in my opinion, obscene. Do you remember all those clips on the morning shows a few years back of the Korean government minister taking off his shoe and assaulting another minister? They played it off as something humorous on our television screens, as if to say, "look at that barbaric display!"

And now, we have members of our House of Representatives, shouting each other down, no practical arguments presented, none heard. Apparently, one Congressman from a Southern State suggested that the caning of Senator Sumner in 1856 was something to aspire to in this day and age.....

And outside, members of the Tea Party (who were, apparently, considered at one point to be the hope of the nation, providing a strong third party to this countries woeful electorate system) were chanting racist and homophobic remarks to elected members of the government.

I respect the soldiers on the ground; I respect their dedication and their bravery, and there aren't enough accolades in the world to bestow upon them....

I'm sure I'm not the only one who has noticed that the military tends to fight the current was just like they fought the last one. And that's been going on since the British lined up to fight the Colonial militia, and thought it bad form to shoot at them from behind rocks and trees.

Seriously...did we honestly believe that we'd just go in there and be greeted as liberators? That we'd have their hearts and minds? That our enemy would put on uniforms and be easily recognizable?

In short: To catch and subdue a clever, creative enemy, you must have clever creative people to oppose them.

But until we all wake up and realize that it is not 1955, and that we are the biggest problem to overcome, and that listening is just as easy and more productive than NOT listening.....and that five minutes on a news program is not enough time for logical debate on any topic, including Tiger Woods.....and that most people on the television are only worth ignoring anyway and I'm talking to YOU, Kardashians!

We are soooooooo screwed.
Posted by Historiclemo at Monday, March 22, 2010 No comments:

I think (I HOPE) I am speaking the truth when I say that I believe that selfishness has never really been a permanent part of my make-up. I understand that our nature sort of demands the occasional moments of selfishness (survival is, by definition, a selfish desire), but for the most part, I would like to believe (and here's where that HOPE comes in again) that I'm more giving than receiving.

That being said, I have to defend my moments of selfishness.
Ain't life weird?

I have friends I don't want to share. They were with me before the bonding, and I won't give them up, and I won't share them. It sometimes takes too long to explain and translate that unique language that friends have. And, YES...I feel badly when I get to laugh at a comment that nobody else in the room gets....but at the same time, I don't feel THAT badly.

There is no single history for any living creature. There is a history for every single person or group you come in contact with.

My histories rarely mix; in fact, it's surreal when they DO.

In the small world that I used to live in (the theatre, dahrling...), when two friends from separate histories would have a common history, it was enough to make my head explode. And we all know how messy and inconvenient THAT can be. But it did save time in the aforementioned "translation" period.

I don't have to do that too often anymore; and I apologize if I offend anybody in my current circle, but my current state of living is not conducive to ME being interesting......but you should have seen me in my prime. And if I don't find MYSELF interesting, I'm pretty sure that I'm not going to find anything around me stimulating. And these days.....

So, there it is in a nutshell. I share much; but I draw the line in a way that most people will think, "Why did he draw the line there? What's the point of the line, anyway? Boy, he's really gone downhill since the incident."

Shabble. (It's the compounding of S**t and Babble.

I don't get around much, anymore.

I thought about a post about my ill feelings toward St. Patrick's Day, but then the thought occurred to me: Who Gives A Crap?

I mean, most of the time, I bore the crap out of myself, I can only imagine what other people think.

By the way: St. Patrick's Day is a sham; it's Amateur Hour for drinkers of cheap beer turned green so they can oooh and aaah. St. Patrick's Day is the biological result when Shame eats too much stupidity. The only redeeming factor of the date is the fact that you can get Corned Beef and Cabbage at any restaurant in town.

But alas, it's usually overcooked.

It's flooding in a few parts of the Northern State, but before anybody gets as crazy as some of the national networks have....this actually happens EVERY YEAR. If the towns along the Red River would just suck it up and build a freakin' levee, my world would be a lot easier to deal with.

And don't ask me why I'm putting in overtime for this nonsense. No airports or personnel is threatened. Why am I worrying about it? I DON'T KNOW. But I AM tired of it.

The truth, friends and neighbors, is that I'm looking for something in which to look forward. And I can't seem to find anything.

A good place to hole up, given the circumstances of the past few weeks.... 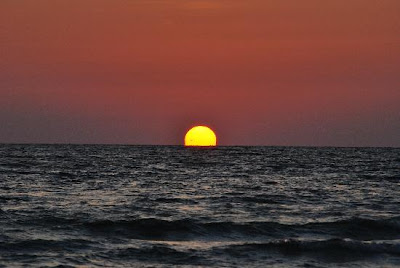 There is something unique about this place.

I've been a lot of places, and I've seen a lot of things. I would like to forget some of them as a nightmarish figment of my over-abundant imagination, but I know better. And there are some that I keep in amber, to be taken out and admired, and fawned over from time to time.

This place, this Siesta Key, is a keeper. There is a kind of festival atmosphere here, with live music consisting of small combos of pop, folk and jazz blending with the laughter concocted from what the great Buffett referred to as, "Boat Drinks."

What would a drink be without a little....tiny....bamboo umbrella?

The food here is diverse; Cuban; Italian; Japanese; and good old American "Fryitup." I had a hot dog at a place called The Salty Dog that had been dipped in beer batter and deep fried....and the condiments put upon said dog...well, let's just say that the thing was obscenely tasty and I will, in fact, pay a doctor later to fix what that one meal broke.

The sunset is witnessed nightly by a gathering. They line the beach and watch the yellow ball of fire in the sky be doused by the abundance of water; they play taps in front of the old Captain's house, and lower the flag. They offer their thanks to those that served and their gratitude to those that gave the last full measure. And then, everybody walks over to Big Olaf's for a reasonably good scoop of ice cream.

The night's have been chilly, which is, of course, good sleeping weather.

And there is so much left to see; tonight, we see baseball, tomorrow is a botanical garden.....yesterday was the Ringling Circus museum.