Calm in the Chaos.

A physician once gave me a warning, just before he administered a test:

"This test may cause vertigo and nausea."

And when I was done throwing up, I realized that the test itself was a metaphor for life.

It's a test; and it may cause vertigo and nausea.

Of course, that's a dark way of looking at it, but I tend to look through the mirror darkly.  I have a couple of things hanging on my office wall..... 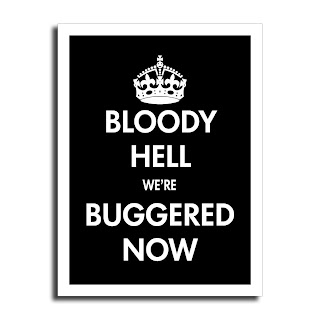 But fear not.......every so often, when the wind is right and the sun hits that certain part of the sky where white becomes gold.....THIS comes to mind..... 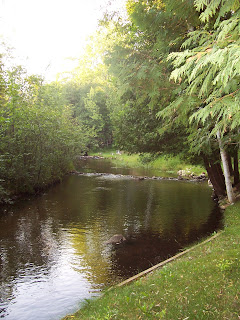 And all is well.

May the God of your Faith watch over you.

This is a rant, not an argument, not a discussion. A. RANT. Comprende?

I put up a status update on Facebook yesterday, after discovering that the Congress of the United States once again behaved like a well oiled Society of Idiots.

I took a label from P.J. O'Rourke; I called them a Parliament of Whores.

And for that, I apologize to Whores everywhere.  It was insulting to lump them in with that inept group of......oh, fill in your own adjective here.

I deleted it, and fixed it with humor, in the hopes that some fringe friend on my list wouldn't go all Second Amendment on me....the rights...blah blah blah....will not be infringed.

Over 90% of the American people support a change in the way we do background checks on guns in this country.  More than a few individual states have tougher controls than the ones suggested by the Federal Government.

And this illustrious body of cowards thought that their NRA rating was more important than the deaths of innocents at the hands of mad people who just MIGHT get caught in the net if there were adequate, universal checks and balances in place.

I could accept a "MIGHT" over the positivity of dozens of child sized coffins.

But in a world where 51% is a majority, it's actually 60% in the hallowed halls of the Capitol Building.

And the American people (like myself) get angry and shake our fists in impotent rage and energy draining angst, and think that we don't have a choice.

Heidi Heitkamp (D) ND stated that she couldn't support such a thing because, "It places undue burden on law-abiding people."

The law abiding have nothing to fear, do they?  And wouldn't the law abiding actually not horribly mind a law that protects them?  Or are law abiding gun owners only interested in the law of the gun?

So, Heidi Heitkamp (D) ND, whom I voted for....Enjoy your four years.  You won't be getting four more.

You can stay at home and clean your guns.

Oh, and by the way.....I remain INCREDIBLY DISAPPOINTED in my generation.

Posted by Historiclemo at Thursday, April 18, 2013 No comments:

Most days, I look back and laugh; just like we told ourselves we would.

Woke up this morning with a sore throat.

I croaked out an ironic, "Good morning" to my favorite wife, and immediately got caught up in the movie version of SLEUTH, starring Olivier and Caine.

Great flick.  Based upon a great play.

I had enormous fun back in the 80's, playing the Olivier character at a little theatre in Iowa.  It's a two hander, very complex plot.....lots of lovely twists and turns.  Great ending.

It was my first real success as a professional.  I never really had a bad review as a professional, but the one from SLEUTH at that little theatre on the banks of the river in Iowa was kept until the paper turned yellow.

And I think I've talked about stories from that production.....my favorite being the night that too much black powder was placed behind the door of the safe, to help the effect of it being blown open.  And it blew open.  It blew off its hinges and flew over our heads.

As most of you know, there is a test of your equipment when you leave the womb of the educational theatre and head out into the professional; you work your way up, doing non-speaking roles, carrying rifles in the outdoor heat, and getting killed by Indians or white guys every other scene.  You set tables at dinner theatres and build sets and paint floors and in some cases, help to reupholster the seats.

And when you get to the moment when you're carrying a show, you get to see if all the stuff that well meaning professors stuffed into your head, and all that stuff that you read that was written by the Legends of technique and method, and all the things you saw and observed and critiqued and occasionally stood in awe of, have made any difference at all in your work.

Or if you have any work of your own to begin with.

Because at the bottom of the list is the final analysis:  Can you hold the audience?  Can you move the play?  Can you get them to suspend their belief in what's real, and buy into your reality?

And with that play, in that small theatre along the banks of a mighty river in a little town in Iowa in the middle of the Reagan years, I learned that (sonavabitch!) I could.

So.  I have a sore throat.  And I have a voice that sounds like it was treated to being dragged six miles behind the back of a car along broken glass.  And I have this small smile on my face.

Because I could work.  I have a really yellow piece of paper that proves it.

On this day 39 years ago, a quiet man stepped to the plate and hit a ball over this part of the fence. 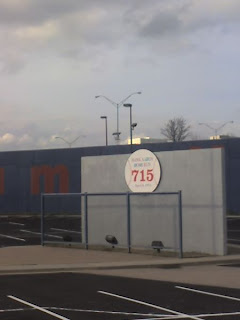 About 55,000 people were in the stands that day in Atlanta, at the old Fulton County Stadium; and several billion were watching on NBC.  I was one of them.  It was like the fourth game of the 1974 season, and as a treat my Father allowed me to stay up and watch.

My Father was keen on his boys witnessing history in all its forms.

In the fourth inning, the ball came zipping in, and then it went zipping out.  Cannons fired; a couple of young men jumped the fence and patted the great man on the back as he rounded second; there were grins on their faces, knowing full well that they were not only a part of history, but they would soon be part of the docket on the Fulton County Courthouse for trespassing.  The great man scowled a bit; but can you blame him?  He'd been getting death threats since the Fall of 1973....he was most probably jumping out of his skin when they came at him.

He was met at home plate by his teammates, the media, and his Mother and Father.  His teammates tried to hoist him onto their shoulders, but he demurred in order to approach his parents and receive the best of all possible rewards; a hug from his Mother.

He was quoted in the media as saying that he was thankful to God that it was finally over; and that he never knew his Mother could hug so tightly.

I don't remember who won the game.  I probably was ordered to bed before the end of the game.

715 home runs.  It was considered an impossible record to beat.

And the record still stands; the pretender to the throne is simply an asterisk as far as I'm concerned.

Hank Aaron, the Hammer is in the Hall now.  Number 44 still works for the Braves organization.  His #44 hangs in Cooperstown; and that section of wall that the ball sailed over is a monument in the parking lot of Turner Field.

But that lovely feeling, that tingling sensation at being thrilled and proud of a man you've never met never really goes away.

And that's one of the reasons I love baseball.

Well, that, and I love watching the Yankees take a beating.
Posted by Historiclemo at Monday, April 08, 2013 No comments:

Actually, the hopeful ending suprised me a little.

Yesterday, I received by email the last of the "Thank you but we've gone in another direction" letters from the last of the theatre companies that looked at any of my material.

When I was younger, something like that would have been like a humiliating kick in the crotch.  As if there were any other kind of kick to the crotch.

I'm older now.  And with age comes either wisdom, or the lack of the ability to continue to care at that level.  I'm banking on wisdom.

A small part of me was looking forward to the challenge; first, the challenge of the audition (which I've written about and am firmly convinced that it wasn't bad), and the imagined challenge of working on a new show with a new cast in a new place.  A breath of fresh air for my oxygen deprived soul.

But younger days had fewer responsibilities; gas in the car, rent paid.....post office box paid for.  Now, there are larger bills and a lovely woman who gets quite irritated at prolonged absence.  She has a vivid, yet misguided imagination.  I was/am never quite the target of female attention that she believes I am/was.

Oh, yes, and I'm ancient by any "travelling actor" standard.

So, my head with its enormous brain (which I occasionally use to work crossword puzzles and income tax forms) is of the belief that "to everything there is a season" and my season in the sun has become a comfortable seat in the dugout; and it was a good ride and great fun and I have a ton of memories that continue to make me smile as they play on the movie screen in the back of my head.

My heart is in self-loathing.

I'm heavier; and slower, and jowlier.  My eyesight is going.  The old injuries are collecting their dividends like a hoard of Mr. Monopolys.

The spirit is willing.  I still have keen analysis skills.  I can still tear a passion to tatters, to very rags to split the ears of the groundlings.  And I can occasionally make like Yorick, and set the table at a roar.

But the flesh is weak.  Stoopid flesh.

There may be one more great project out there; something that I've been working on for a long while, but this malady of slight misery has given me a direction for it I can truly play now.

Because nobody knows anything; and I'll just jump....and we'll see.

The sun may come up cold in a lot of places today.  There may be more than grass on the infield; there may be a bit of frost as well.  And the shadows will be long on the fields that lie roofless and open to the Spring skies......but not for long.

For today is the day when dreams begin again.....another summer in the sun, rooting for men playing a boy's game.  A summer of wooden bats and pristine white balls with bright red stitching.

Where your home team (wherever it may be) are heroes, and everybody else is a bum.  Where the heroes of your youth come out in their true skin, the uniforms of their youths, and the ghosts of Clemente and Ruth and Robinson and Paige and Cobb and Shoeless Joe walk amongst us, and in Ruth's case, try to steal our red hots.

Where you always sing during the Seventh Inning Stretch.

And all the boys that wish they could have, imagine themselves like this...... 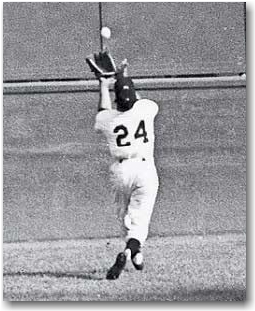 Posted by Historiclemo at Monday, April 01, 2013 No comments: