Hail and Farewell to a Legend. 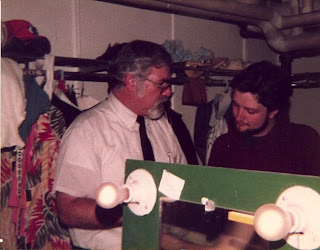 In the summer of 1980, I was a young alcoholic-to-be artist just about to start the adventure of a lifetime.....University education in the Great White North of the Mitten.
I have a few distinct memories of the summer's introduction to the campus of the Northern University; I can remember it was damned hot that July; I can remember some instant friendships formed, some that exist to this day; I can remember a fairly good 50's band playing in the parking lot, and a girl in a poodle skirt that haunted my dreams for several years.
And I remember Daddy Bear.
My first introduction to the Great Man was sitting in his office as he gave me the spiel about the theatre program and which classes I should take my first semester.  I can say that the man wasn't intimidating, but he could fill a room.  But, he had this way about him.....you only needed to be in his presence for a minute or two, and you wanted to be his friend.  You wanted to know him.
He directed me in several things, as I recall; a very memorable production of TAMING OF THE SHREW where I first discovered that I could be creative if I just stopped thinking.  And I also learned that directing sometimes means sitting back and letting the actors do the thing they do.  He cast me as Applegate in DAMN YANKEES, even though the day of my audition, I could hardly speak due to a throat infection.
When he taught Intro to Theatre, he convinced generation after generation that ROMEO AND JULIET is a comedy.  And yes, if you look at it in its entirety, it IS.  Cuz he said so.
But the thing I remember most is after a production of a student-directed one act called LOU GEHRIG DID NOT DIE OF CANCER.  He took me aside for a moment, after I was cleaned of make up and running around to catch the next production in this evening of one acts.
He took me outside the room, and looked me in the eye.  If you knew the man, you knew that when he looked you in the eye, he LOOKED you in the EYE.
"You're a hell of an actor."
He went on for a few minutes, supporting his thesis, but I didn't really hear it.  All I heard was his confident assessment in my abilities.  The rest was a warning about not f***ing it up with da booze.  Then he put his arm around my shoulder and we went back in.  He probably never knew that I was six inches off of the ground.
And after I graduated, when I came through the Northern Town, I always had a table to sit at and a bed to lie on.
And a man to admire.
James Rapport, known forever to all that knew him as Daddy Bear, exited this stage on August 28, after what seemed to be a very short illness.  I will cry for a short time today, and smile for awhile after that.  And I hope to see him again when the time is right.
﻿
Posted by Historiclemo at Monday, August 29, 2011

Thank you for your wonderful tribute to my father. I have read many in the days since his passing, yours really struck a chord in me, the way he could inspire you to be your best by seeing the best in you and sharing it honestly.