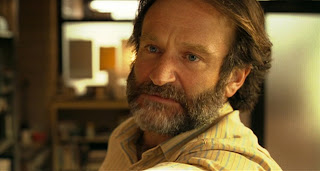 A week or so ago, I was partaking in some concession at the ballpark (I have these really cool half-season tickets, that provide free food for the first five innings of the game) and I wound up riffing on a theme with one of the attendants, who was apparently impressed with my gift for the random gab.

"You remind me of Robin Williams, but I bet you've heard that before.  You kinda look like him."

I thanked him for the compliment; for it was a good one.  And I smiled, took my edible swag and headed to my seat behind home plate to watch the Bird Boys play host.

The thing is...the minute he said it, a wave of melancholy washed over me, and I was tossed upon the Sad Reflection Beach.

Aside from the apparent similarities in our delivery, which for the normal folk of the Capitol City of the Northern State must seem a bit wired-and-weird, there is one thing Robin Williams and I shared.

I enjoyed his work immensely, even the stuff that didn't work for him.  Yes, I liked POPEYE, and I like GARP.  And I even liked BICENTENNIAL MAN.  The suspense stuff, I could take or leave....and some of my favorite moments of BARON MUNCHAUSEN were in his uncredited turn as the King of the Moon.

But I am haunted by BEING HUMAN.

It's a movie of slow moving vignettes; Williams plays a man in five different time periods, and as you continue to watch, you realize it's the same soul, moving through time, making the same mistakes as he tries to grow.  He once said that, "What's right is what's left after you doing everything else wrong."  I'm certain that is the prevailing theme of BEING HUMAN.

The guy could go on a frantic riff about anything you could name; his first album, REALITY.  WHAT A CONCEPT, made me laugh out loud when I was in college, and continues to do so to this day.  His mind worked differently than anybody I have ever seen or met, and he could make a stone laugh.

But the portrayal of a man who tries so hard to be brave, to do the right thing, and falls short each time is heartbreaking; and you see it in his performance.  It seeps from every pore.

His life was gentle, and the elements
So mixed in him that Nature might stand up
And say to all the world, "This was a man."

I was sorry to see him go.

I believe that my actual online response to the news was, and I quote, "AHH, GODDAMN IT!"

So, let me take this opportunity, on the day after, so say, "Happy Birthday, Robin Williams."

Well said, John. And I can see certain sad clown similarities in you and him...as well as a certain physical resemblance, especially with the beard. Write on.